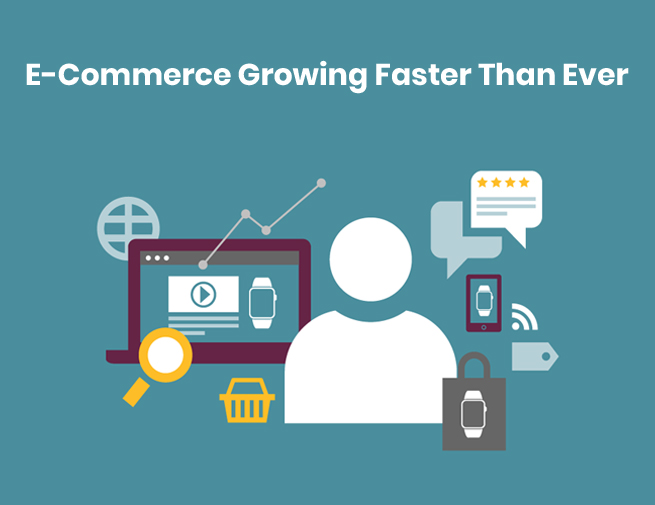 E-Commerce Growing Faster Than Ever

The big shopping-related news this past holiday season was about an unexpected surge in online shopping which led to delayed deliveries. UPS realized that it won’t be able deliver goods to some customers in time for Christmas as did FedEx though to a lesser extent. Traditional retailers are losing millions to showrooming (when shoppers check out products in stores that they then buy from online retailers). The “good news” on the showrooming front is that the percentage of online purchases attributed to showrooming declined from 50% in 2012 to 30% in 2013. To counter the growing attraction of online retailers, traditional retailers are offering huge discounts and almost bleeding themselves to death in the process.

The retail sales data from the U.S. Census Bureau shows the contrast between a growing e-commerce sector and an almost stagnant overall retail sector quite clearly. While e-commerce accounts for about 6% of overall U.S. retail sales, online purchases during the latest holiday season were about 14% of sales.

The U.S. Census Bureau divides the total retail sector into six categories. Of these categories, “Health and Personal Care” and “Food and Beverage” categories have low E-commerce penetration. This makes sense as these are traditional domains of grocery stores and drug stores. So far, E-commerce companies have not been able to make major inroads into these traditional strongholds of big box stores and supermarkets. Other categories of the retail sector such as “Clothing and Accessories” and “Media, Sporting and Hobby Goods” have much greater E-commerce penetration. It’s quite clear that a growing portion of the specialty retail categories is being captured by E-commerce.

The gloomy news for traditional retailers and good news for online retailers continues:

1. Declining sales in the holiday season combined with an increase in the number of online shoppers (Source: Nytimes.com)

3. Online sales grew substantially on both Thanksgiving and Friday this year, up nearly 20 percent Thursday and almost 19 percent on Friday

4. Amazon and eBay are going from promising “same-day delivery” to eBay Now’s promise of shop-and-drop-off “in about an hour.”

5. J. C. Penney Company is closing 33 stores across the country and shedding about 2,000 jobs

6. Sales at Sears have declined for 27 straight quarters. Sears is also spinning off Sears Auto Center and Lands’ End

7. Best Buy has managed to reduce showrooming by matching the prices of other online and offline retailers

The basic truth appears to be that traditional brick-and-mortal retailers have built up too many physical stores over the years and these stores come with huge overheads and fixed costs. It’s tough to make profits from these stores which is precisely the reason for the store closings by J. C. Penney and the sell offs at Sears.

It’s clear that a virtuous cycle of creative destruction is occurring right now in the retail sector and the trend lines are obvious. Retailers and business across the world are truly realizing the mammoth potential that the online arena is bringing. The choices are simple; adapt and survive or get eaten by others. If you are looking for any advice or help with your online strategy, please feel free to reach out to the team at Mind Digital.