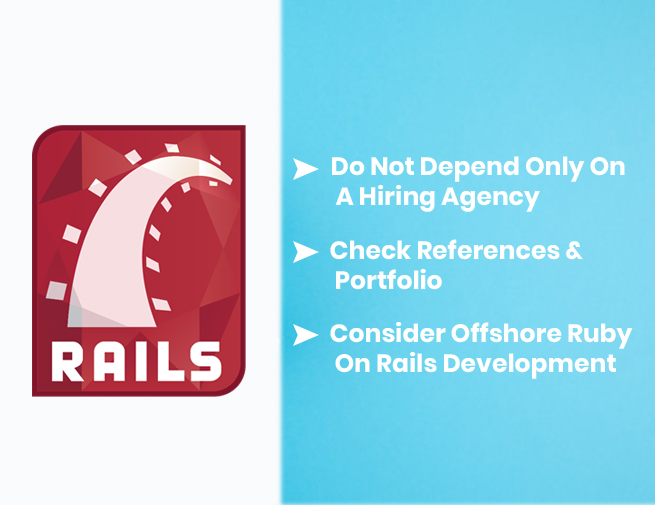 What To Consider While Hiring A Dedicated Ruby On Rails Developer?

Ruby On Rails is a web application framework used by web developers which eases the process of the development of impulsive websites and web based applications/resources. It is an easygoing tool, which allows the creation of an out of the box database. It also helps a website or page collect information from various web servers, sources and resources. It works on an active record pattern and model view controller patterns, two of the most appreciated software engineering patterns. Both these patterns are used to organize varied sections and procedures of web application programming.

In today’s booming web design and development market, Ruby On Rails has surfaced as one of the easiest and most captivating frameworks in the development world today. It is an object-centric programming language because of its simplicity, flexibility and readability. It is so simple that developers can finish a tiresome, multiple-month long task (of some other programming language) in just a couple of weeks. Some of the very popular websites (like Twitter.com and UrbanDictonary.com) are developed on the Ruby and Rails framework. The whole thought process behind Ruby On Rails is to accomplish more by writing fewer lines of development code.

Owing to the simplicity and back end conveniences that comes with Ruby On Rails, a number of businesses choose to go with website development on the Rails platform. The inventions that have simplified life have come through some of the most difficult pathways. Similarly, there are several points which you need to consider when you are going to hire Ruby On Rails Developers. Some of these points are enunciated in the subsections below:

Do Not Depend Only On A Hiring Agency – When you are going to hire a Ruby On Rails developer, you should never depend on any hiring agency. Instead, you should prefer employing them, after seeking references from your near ones. Get recommendations, opinions, and assistance from colleagues, friends, or technical development experts you may know. It will help you reach an already tested and verified Ruby On Rails developer. However, for some urgent requirements, you can consider posting your job requirements on some job sites such as Indeed, Monster, LinkedIn and so on. There is nothing wrong with getting a recruiter or hiring agency involved, however try your best to fill this position by looking through your network first. If you are unable to, then get them involved as it will cost you money which you can possibly save.

Check References & Portfolio – This is probably one of the most important points when hiring a Ruby development professional. Ensure that you are speaking to people they have worked with as well as check the portfolio of Ruby On Rails development work to get a sense of if they are as good as you they say they are. It is very important that you are making all of the Rails development candidates go through stringent checks to ensure that you don’t have someone that is unable to deliver what you need.

When hiring a dedicated Ruby On Rails developer, many things need to be taken into consideration. Whatever decision you make, ensure that you have done your due-diligence and are completely satisfied with your decision. We hope this simple list has been helpful to some people and as always if you need any Ruby development help or anything else web related, feel free to reach out to the team at Mind Digital Group.