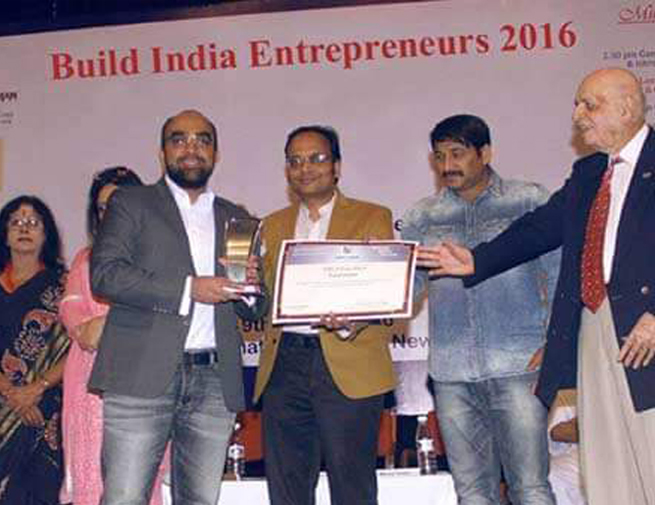 Mind Digital Group takes great pleasure in announcing that its founder and director – Mr. Yusuf Javed – has won the prestigious Build India Award for his contribution in the development of India. The Group feels extremely proud to bag an award instituted to honour NRIs (Non Resident Indians) for their relentless service and dedication to the cause of building India which is one of the fastest growing countries in the world today.

The award ceremony took place on the 19th of March 2016, at IIC, New Delhi and saw the congregation of some well-known luminaries and dignitaries from across industries. Founded by the Bharat Nirman Organization and supported by the Government of India, the award was presented by a noted Member of Parliament (MP) from the current ruling party.

Mind Digital feels honoured at the selection of its founder for an award which recognises our founder and his zeal towards the cause of the nation’s development. At the same time, the Group is elated at the timely recognition of its mentor for his relentless passion to making a difference in the online marketing domain.

This award holds great value for a company that has recently gained Google AdWords Certification.It’s a hugehonour to a man credited to have helped build multiple world class organizations across the world. The award is a perfect tribute to someone who has worked across 3 continents and played an integral role in building many world-class organizations. It is a fitting acknowledgement for Mr. Javed’s decade-long experience in Online Marketing (SEO, PPC, Social Media & Display Media) and Development (Web, Salesforce, Mobile, CRM).

The award acknowledges an industry stalwart who has been a part of organizations as notable as Forward3D, the largest independent digital agency in Europe; Zeta Interactive, a top 10 digital agency in New York and Yodle Inc. a brand that hit #35 on the INC 500 list for “Fastest Growing Companies in the US.”

For Mind Digital Group, the award comes as a massive achievement as it reflects the true spirit of its founder in serving esteemed clients for their high-end digital marketing and development requirements. With this award, Mind Digital feels more committed in delivering world-class customer service to clients across industry verticals. Mind Digital has more than 75 people on staff with offices in New York, New Delhi & London and works with a varying array of clients across the US, UK, Australia, South America & Europe.